Go toNext Gen Ministries ministy at a specific location.
or view all locations .

The Future of Christianity The Next Generation

In a church of nearly 100 years old, we understand the value of multigenerational ministry. We also know that the church, both the universal Church and the churches of the City Rise network, are always only one generation away from not existing. It is our children who must continue to make disciples who make disciples of their children and their childrens’ children. By the grace of God we have been privileged to do that for nearly a century, and our hope and prayer is to keep doing that until Christ returns. We want our children and youth to be with us on that great day!

CityRise KidStuff small groups have experienced over 50% growth in the last year. Our small groups teach the entire Bible over three years, making sure every story leads back to the significance of Jesus Christ and His death and resurrection.

At our 2021 Vacation Bible School, we were blessed to see 30 children come to know Christ as their personal Savior. We celebrated the arrival of 354 kids on our West University campus to worship, study God’s Word, make new friendships, and have tons of fun! At our Fall Carnival, we enjoyed seeing over 400 people show up for a fun time of celebration, community, and friendships.

Our KPNO (Kids and Parents Night Out) season was hopping with 180 kids on average, up to 230 children entering our church for an incredible night of fun allowing parents a night to themselves or to connect with other couples.

Each week, we welcome on average just over 300 children to attend KidRally or participate in small groups. Both environments were created to help lead children to know and follow Christ and we’re privileged to see amazing results.

On Wednesday evenings our KidStuff team focuses on memorization and comprehension of God’s Word through Slugs and Bugs and ETCH. Children are able to enjoy hands-on projects, games, worship and small groups dedicated to hiding God’s Word in their heart! This program has seen over a 90% increase over our 2021 program!

This year our KidStuff team has been committed to sharing the gospel in a consistent way that involves parents. Our desire is to explicitly share the gospel every quarter in our ministry. We alert parents, send home guides and information for families, and give children the opportunity to talk about their spiritual journey with our Childrens’ Ministers. Our first quarter, we had over 10 children come forward and move towards baptism! 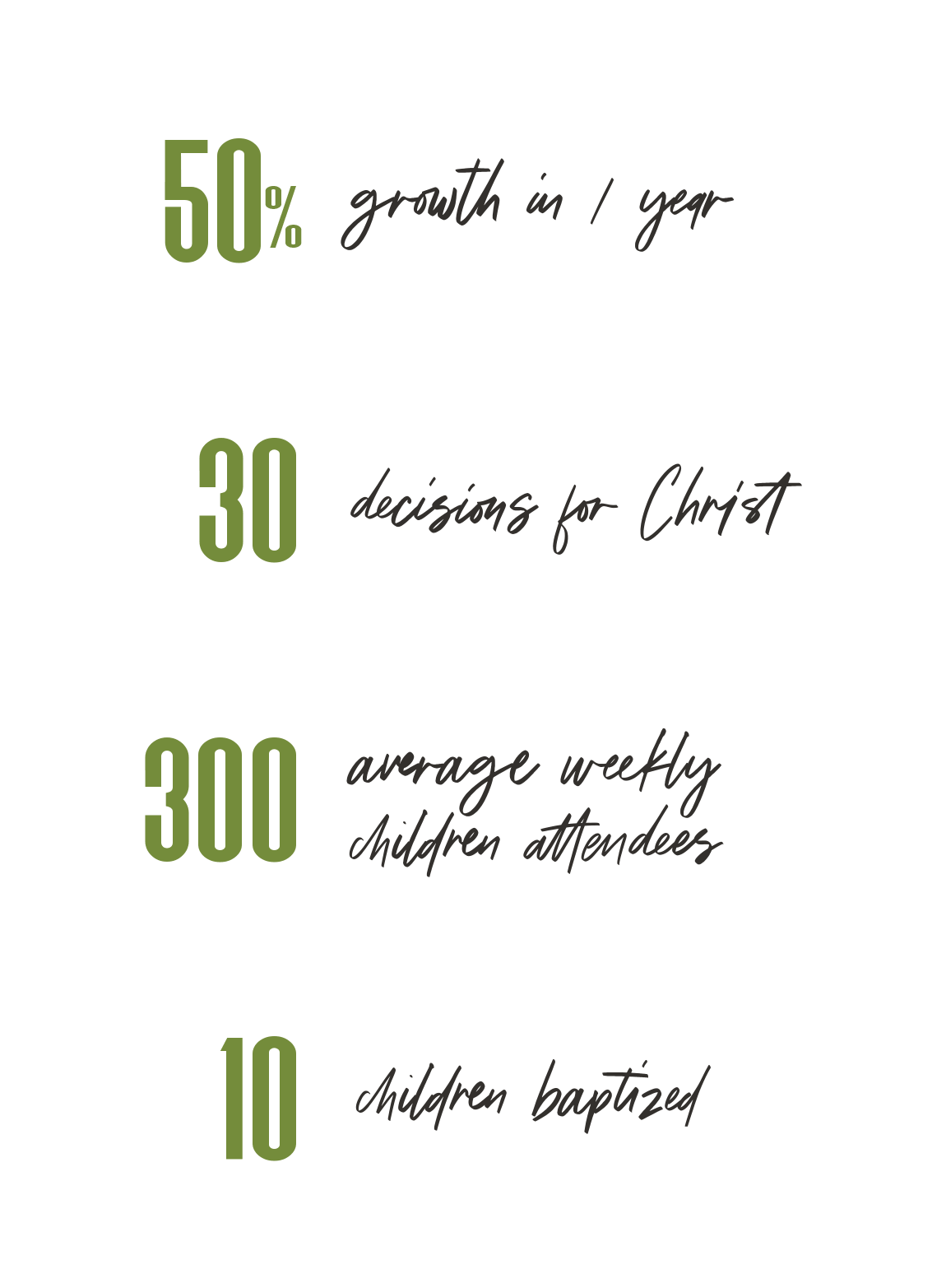 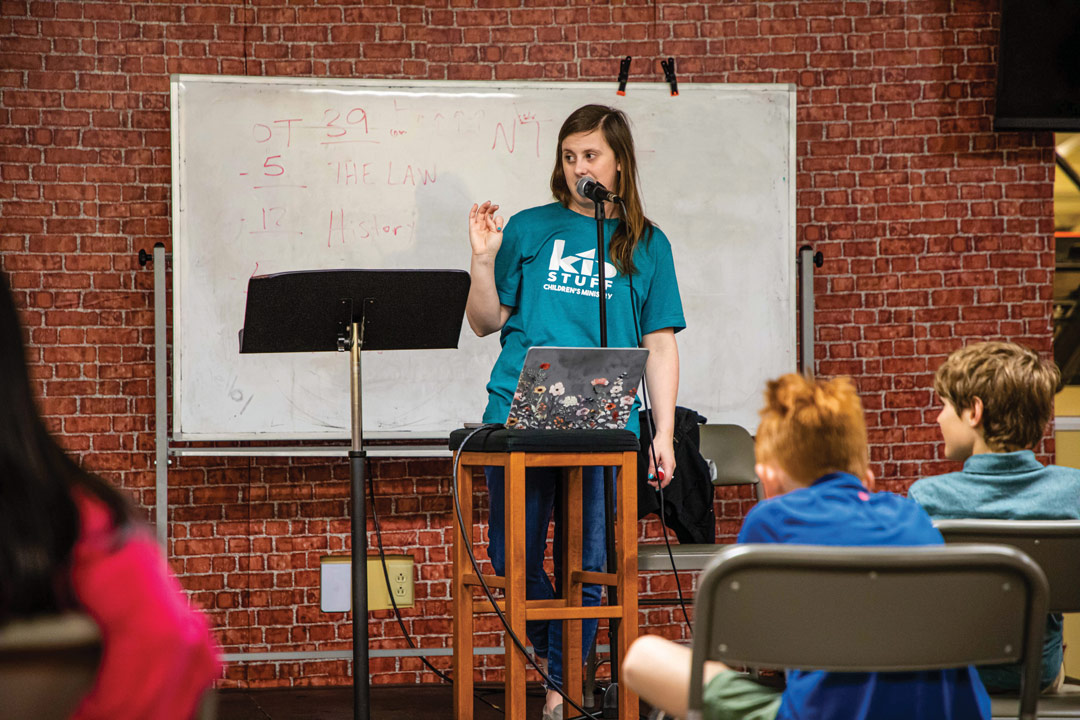 The latest with Students

God is doing so much in our student groups this year already, and it’s been amazing to watch Him work! Here are some recent highlights:

“Small group time really speaks to me and encourages me and gives me the motivation I need to follow Jesus again.” – a female high school student in our ministry

A young woman in our ministry opened up about her biggest hang up with being near to the Lord is that she does not have a household that encourages it…She was thankful she came this weekend, so she can now be connected to mentors in her life to fill that void and hold her accountable in her walk with Jesus.

There is story after story of students asking for prayer that God would surround them with better, more godly friends.

At our Winter Weekend retreat a middle school boy prayed over another middle school boy with a really rough past and led him to Christ.
A student recently asked for prayer because she felt unseen and not valued in her life, but at church she feels and knows that she is seen by God. She just bought a Bible and asked if one of our leaders could disciple her and help her learn how to spend time with Jesus!

Students are learning how to actually “abide” in Jesus (John 15:1-10) at home instead of the “camp/event high” then not seeking Him in between. Our small groups have spurred cool conversations.
A brand new high school student that just recently moved to Houston and just plugged into the student ministry asked for prayer about loneliness, being a new student all the time is hard on her, and she said she acts confident but feels very lonely. One of our leaders prayed with her that our church would be the answer to that.

We got word from a parent of a student that the student was worshiping in her room on Sunday night and having some quiet time on her own. Very cool!

In spring of 2022, we launched a brand new ministry called CityRise Co-Lab, a co-working space for young professionals and graduate students. We gather every Tuesday to work/study together and provide food and spiritual conversation at lunch break.

Also, we have held a few fellowship gatherings specifically for single young professionals. This group is growing at CityRise and growing closer together.

We are Savannah and Keith. We met in college at the University of Florida, and in 2013 we found a home in Houston after moving for a job opportunity. We have two girls who we love and cherish; Ansley is 11 and Emerson is six. We both grew up in church and met in the Baptist Collegiate Ministries in college. We became friends, and then later we dated and got married. The student ministry was a great spiritual foundation for when we moved and joined Crosspoint.

Crosspoint was the first church we visited after moving, and on that first day David and Denise Glenn invited us to a new class for young couples. That’s when we really jumped right in. Denise and David felt like a mom and dad, because they felt close to us, even though we had moved from thousands of miles away and didn’t know anyone. They were a really great influence for our family as we started our new lives. I remember the Glenns challenged us to give more than what was “routine,” and it was really difficult at first, because when we moved to Houston, we had multiple mortgages from our houses in Florida and Texas, so we had to trust God to provide for us.

We were tithing on our net, but they challenged us to give based on our gross income. It was a challenge, but it really opened up opportunities to give more and more to support the Lord’s work, and it slowly became the new normal, even though at one point we disagreed on how much we should be giving and had to work through it. It was a hard time for us financially, so the idea of giving more was challenging. But we know God deserves our first and our best, so we ultimately decided to give more.
We’re always reminded of Phillipians 4:19: “And my God will supply every need of yours according to his riches in glory in Christ Jesus.” As we gave to God, we began to see Him provide more and more for our needs in ways we would never expect. All these big changes happened as Savannah was no longer working, so we increased our giving while also cutting our income in half. As natural planners, it was difficult, but at the same time it was beautiful and sweet to see how the Lord provides.

David and Denise Glenn have influenced us and our giving so much, yet we’ve heard they owe their generosity to another influence whom we have never even met. It’s amazing how the Lord continues to work through the hearts of others, and these faithful people have passed down an inspiring legacy to us and to you. While we too will likely never meet who is reading this, we pray that our story impacts how you give in the same way.