Go toCampus Infrastructure ministy at a specific location.
or view all locations .

In these two facilities, faithful generations have gone before us so that we could enjoy what we have. In 2005 we opened our Crosspoint Campus to reach people we had yet to meet. That was the heart of this church when it was founded and it was the hearts of those who were here in 1954. Those faithful people erected a sanctuary at our West University campus at 6218 Auden Street, located in the heart of West University Place for people to corporately gather and hear about the love of Jesus Christ and have their lives challenged and changed.

In 1997, Julee and I came here on Mother’s Day. It was the church’s last Sunday in the sanctuary before it was renovated. It’s now time for it to be updated for the ministry we are doing today and the days ahead. 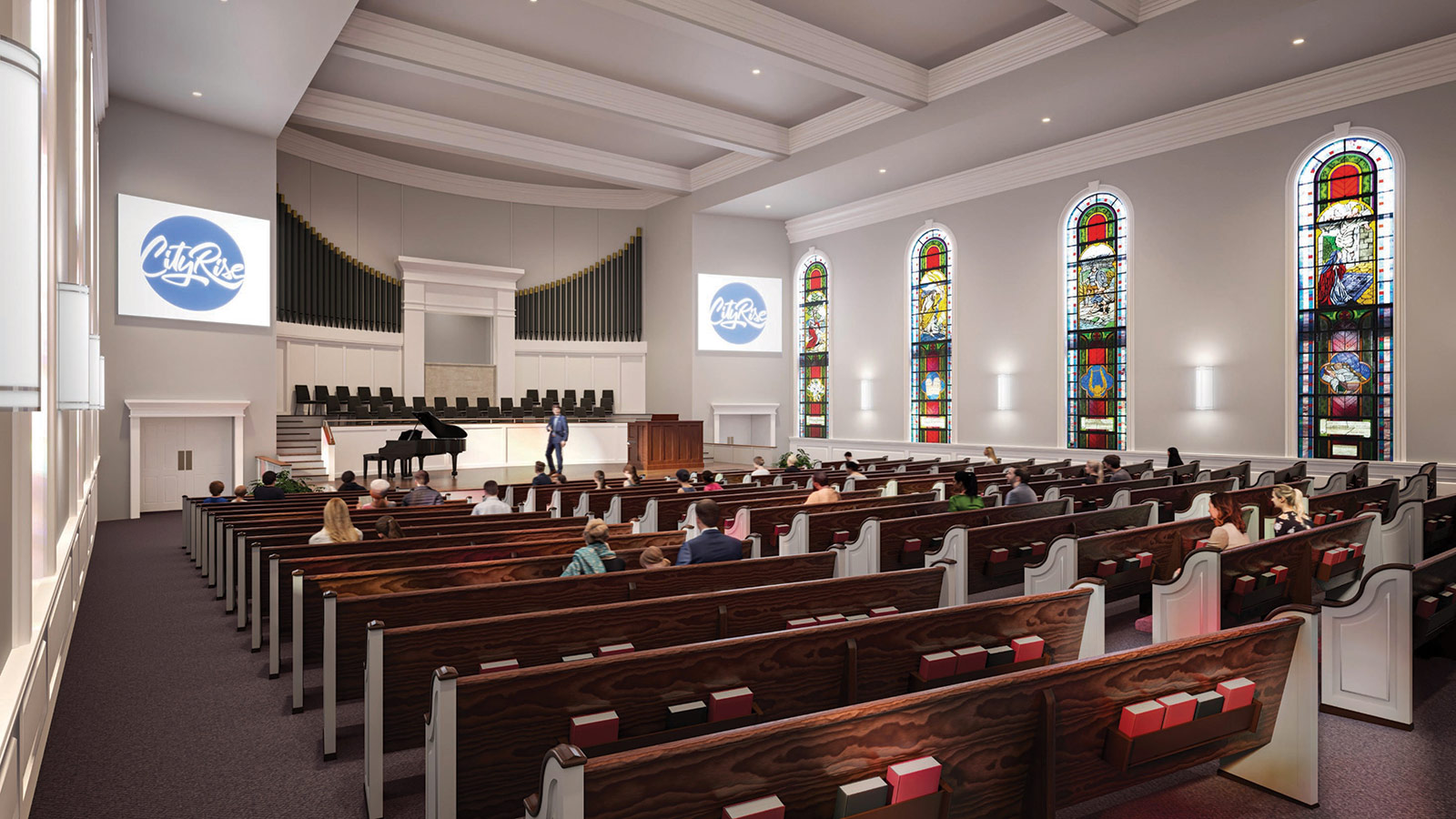 At our West U location, we will light up that Jesus-stained glass that fronts Auden street that will shine out to our community. Jesus stands at the door knocking, inviting us to open our hearts to Him. There will be a new patio that leads to a new Welcome Center building. The new sanctuary renovation will be done in such a way that it’s going to facilitate worship both for classic and contemporary services. The new sanctuary will be beautifully adorned for your classic traditional worship service, but we will also be able to incorporate electronics, digital media, and audio/visual elements that are more compelling for our contemporary services. It’s going to be amazing!

We will make the foyer a bit deeper and where the playground currently sits, build a new welcome center. We’ve been working on this since I first introduced the renovation to you in 2015, and we’ve not yet been able to take these steps. Currently we don’t have any lobby space at West U. We don’t have a place where people can get a cup of coffee, sit down together and fellowship. If we can add this, it will go a long way towards building a community and deepening our relational culture.

We also plan to have a big LED screen over a small stage. It will be a place to take family photos, and perhaps some sort of conversational broadcast service. Imagine being a young mom or grandma who needs some relief. You could put your kids in the indoor playground and go to have a cup of coffee and relax a bit.

At West U, we will build an indoor playground and move the KidRally space to what is currently the Fowler Chapel. We are taking these steps in order to provide a single secure entrance for kids. We will then move the chapel down the corridor that faces to the east and fronts Auden street. This space will be wonderful for our events and classes that take place in the chapel.

We’re going to consolidate parking at West U and seek to add as much parking as possible over the next few years as we pursue properties that are adjacent to our properties.

Let’s talk about Crosspoint infrastructure. I want you to think about the education building—those three stories. This is where our preschool will be. It’s where our elementary school education is, and that building needs a lot of work to make it as effective as possible accomplishing what God has called us to do with those ministries.

Our plan is to do a new grand entrance in the back adding an outdoor patio with a fountain that will also be used for baptisms. We hope to have coffee service here as well. It will be a wonderful use of space that is currently used for a storage shed and our chiller for the campus.

These additions outside will make the campus more appealing and the campus to flow better. As you come into the grand entrance you can go to the sanctuary, the education building, or to the new secure check in facility for kids.

We’re so excited to build up campus infrastructure for our generation and the generations to come!

As we are able, we plan to renovate a number of spaces at our CityRise Missouri City Campus. They include:

Harry: I’ve been at West University Baptist, which is now a CityRise campus, since I was five years old until I went to college in Austin. After that I came back to Houston in 1973 with Sandra. We continued to attend the West U campus until 2005, when we went to populate the Crosspoint campus where we have been ever since.

Sandra: We raised our family there because it’s a place where everyone is involved in raising the children, where being involved in the different programs that are available helps to get the kids involved. Even the capital raising event was something for families to participate in.

Sports were a big part of our lives and for our family, and we wanted to give something that would be noticed by our kids. We also took a vacation to the beach every summer, and we knew if we gave up that they would take notice as well. We wanted them to realize that it’s important to do some sacrificial giving.
We gave up the beach for a few years, but you know the saying “You can’t outgive the Lord.” We found an old beach house for sale as we were walking that we would later buy, and it just goes to show that although it’s not the motive for giving, God always blesses us and gives back to us, so you should always obey when the Holy Spirit is urging you.

We found this out when our oldest son became a minister in Bolivia. We knew that we have a tendency to want to hold onto things, but you always have to trust the Lord because he’d be safer in His hands and doing His will than here in Houston.

Giving of our time and talents is part of the way we give.

I learned when you give your time and talents that the Lord would bless that, and although I never gave to be blessed, He always blessed us when we needed it.

Harry: After college when we set up our home and employment, tithing was just part of our setup. That’s what we had been taught, and that’s what we wanted to do.

We gave a little bit of money from summer jobs, but it wasn’t until we were real adults that we began tithing with our money and time. Sandra would work with GA’s and missions, and I would work with RA’s, and from there we would see other leaders who would be mentors to us. Everybody has different talents, but the Lord can use all of them. We saw them model that for us, and it inspired us to help meet any needs we could, whether financially or with our time or leadership.

But generosity goes deeper than just giving your money, you can sacrifice a lot, which we did, but really giving of your time and talents means a lot. I’ve seen many men working and giving to the Lord when I was younger, both Chester Arnold and Hollace Waldt modeled that for me, so I continue to lead in their footsteps. And many other great men give so much of their time, which has allowed us to do some great things at CityRise.

Everything we do and give is directed by the Lord, we just try to point things in the right direction.

Sandra: Even knowing when it’s time to step down and let others take over is part of giving, especially within the church. Nobody is perfect in the church, and we won’t always get along, but sometimes getting involved with different people allows you to see things from a different perspective, and that’s part of the body of Christ. If we all had the same talents we wouldn’t be used.

Harry: Unfortunately, I lost my father when I was 14, so I had to learn a lot from other men in the church. I learned when you give your time and talents that the Lord would bless that, and although I never gave to be blessed, He always blessed us when we needed it. So even when I was working 60 hours a week, I would still carve out time to volunteer at the church. And as soon as I had more time, it was really fun to grow and meet the needs we saw around us in groups, and it continues to bless me to this day.

Sandra: The joy really comes through in our daily living, and even in tough times, we’ve been allowed to have that peace and joy.

We’re really excited about the Deep & Wide campaign, because they’re working to connect people into small groups, as we were once fortunate enough to experience 15 years ago. The transparency that comes with a small group when you’re all together sharing the deepest things in your life really opens doors for growth and community. It’s a great opportunity for young people financially and for the giving of their time and talents.

We believe so much in small groups and the change that they can bring for the Lord, and it’s really exciting for us to be a part of. God is everywhere and we want people all over the world to know this.