Go toKeith & Savannah ministy at a specific location.
or view all locations . 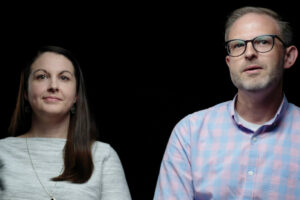 We are Savannah and Keith. We met in college at the University of Florida, and in 2013 we found a home in Houston after moving for a job opportunity. We have two girls who we love and cherish; Ansley is 11 and Emerson is six. We both grew up in church and met in the Baptist Collegiate Ministries in college. We became friends, and then later we dated and got married. The student ministry was a great spiritual foundation for when we moved and joined Crosspoint.

Crosspoint was the first church we visited after moving, and on that first day David and Denise Glenn invited us to a new class for young couples. That’s when we really jumped right in. Denise and David felt like a mom and dad, because they felt close to us, even though we had moved from thousands of miles away and didn’t know anyone. They were a really great influence for our family as we started our new lives. I remember the Glenns challenged us to give more than what was “routine,” and it was really difficult at first, because when we moved to Houston, we had multiple mortgages from our houses in Florida and Texas, so we had to trust God to provide for us.

We were tithing on our net, but they challenged us to give based on our gross income. It was a challenge, but it really opened up opportunities to give more and more to support the Lord’s work, and it slowly became the new normal, even though at one point we disagreed on how much we should be giving and had to work through it. It was a hard time for us financially, so the idea of giving more was challenging. But we know God deserves our first and our best, so we ultimately decided to give more.
We’re always reminded of Phillipians 4:19: “And my God will supply every need of yours according to his riches in glory in Christ Jesus.” As we gave to God, we began to see Him provide more and more for our needs in ways we would never expect. All these big changes happened as Savannah was no longer working, so we increased our giving while also cutting our income in half. As natural planners, it was difficult, but at the same time it was beautiful and sweet to see how the Lord provides.

David and Denise Glenn have influenced us and our giving so much, yet we’ve heard they owe their generosity to another influence whom we have never even met. It’s amazing how the Lord continues to work through the hearts of others, and these faithful people have passed down an inspiring legacy to us and to you. While we too will likely never meet who is reading this, we pray that our story impacts how you give in the same way.