Go toDavid & Denise ministy at a specific location.
or view all locations . 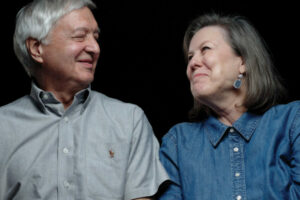 We are David and Denise Glenn, and we’ve been at CityRise now for 10 years. We grew up as believers, and when we came back from living overseas, it was very clear that God led us straight to CityRise. We wanted to sink our roots here to do what God had called us to do.

We jumped into serving as greeters, and we’ll never forget meeting Keith and Savannah Browning. We bumped into them one Sunday and there was an instant connection. God gave us an open door to influence and lead, and we were able to share what God had been doing in our lives with younger couples. This is our heart, and we love being with young families.

One of the first things we shared about was giving and our journey with tithing. We initially never tithed despite being taught to. When we first got married, we were students and had nothing, so we thought “we cannot afford to tithe.” But we were convinced that we were meant to give on our full income of what God has given us, and as soon as we started to give faithfully on our gross, God really started to bless us and give us peace in our lives.

We had just moved to tithing on the gross when we met this older gentleman who shared how he came to giving 50% of his income. We were in shock, and it really moved us. For us, we came to realize that the 10% tithe is only the baseline for our giving, and we know that although giving 50% is probably not for everybody, for us it was what we were called to do.
We give as much as we can, but God always gives more. It’s amazing how God gives to us so that we can continue to give even more. It’s unbelievable how much fun it actually is, that He always provides for us so generously, and we have such a blast giving.

What’s amazing about this whole story is that what we slowly learned from this humble West Texas rancher, we got to share with the Brownings, and we were able to hear from them how they were impacted by our story. It’s amazing the way that God works, that He would use others to share motivation that influences other people to give.

It’s been so great to watch the Brownings grow in their faith and their giving. Who knows what God’s calling you to do? He may have touched your heart just because of all of our stories. We don’t know where He’s going to take you, but it’s so exciting to think about the legacy we’ve helped to carry on and how God raises up His kingdom from generation-to-generation.