Go toBobby ministy at a specific location.
or view all locations . 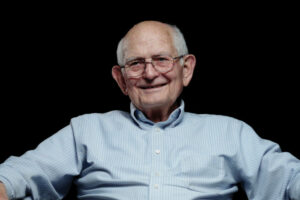 My name is Bobby, and I’m 83 years old. I’ve had the privilege of being a member of this church for 53 years, and I was the treasurer for 32 years. I’ve encountered many blessings over that time and seen God provide in wonderful ways that showed us where He wanted us to go.

One instance of this was early in Pastor Barry’s ministry when we were remodeling our sanctuary. We got to the point where we were short $65,000 to finish the project for the year. We discussed six members that we could maybe ask to help make up the difference, and we decided on that Thursday that we would go home and pray about it. By the weekend, if we still needed help, we’d consider asking them for it.

Sunday came around, and I was going across the muddy street to the church, and one of the couples on our list was over there waiting for me out front. They said they had $10,000 to give us and asked if and where we needed it. I told them about our situation, and they were happy to give it.
That same night, I got a call from another member saying basically the same thing. He had $10,000 to give and wanted to see if we needed it. I told him the same story and he said he’d go and try to find another $10,000, which he did. The next morning, a third member on that list called and said he had $20,000 to give and someone who was not even on the list called Pastor Barry to offer $17,000.

The short version is that by Wednesday, we had $65,250 without asking for a cent. When that story got around, even more people gave. What that meant to me was the Lord was working with this church to see that it kept going, because He had bigger and bigger things for us to do in the future. He certainly did do bigger and bigger things, and I know that He is only just beginning to bless and use CityRise.