Go to“Christmas at CityRise” // Luke 2:8-20 ministy at a specific location.
or view all locations . 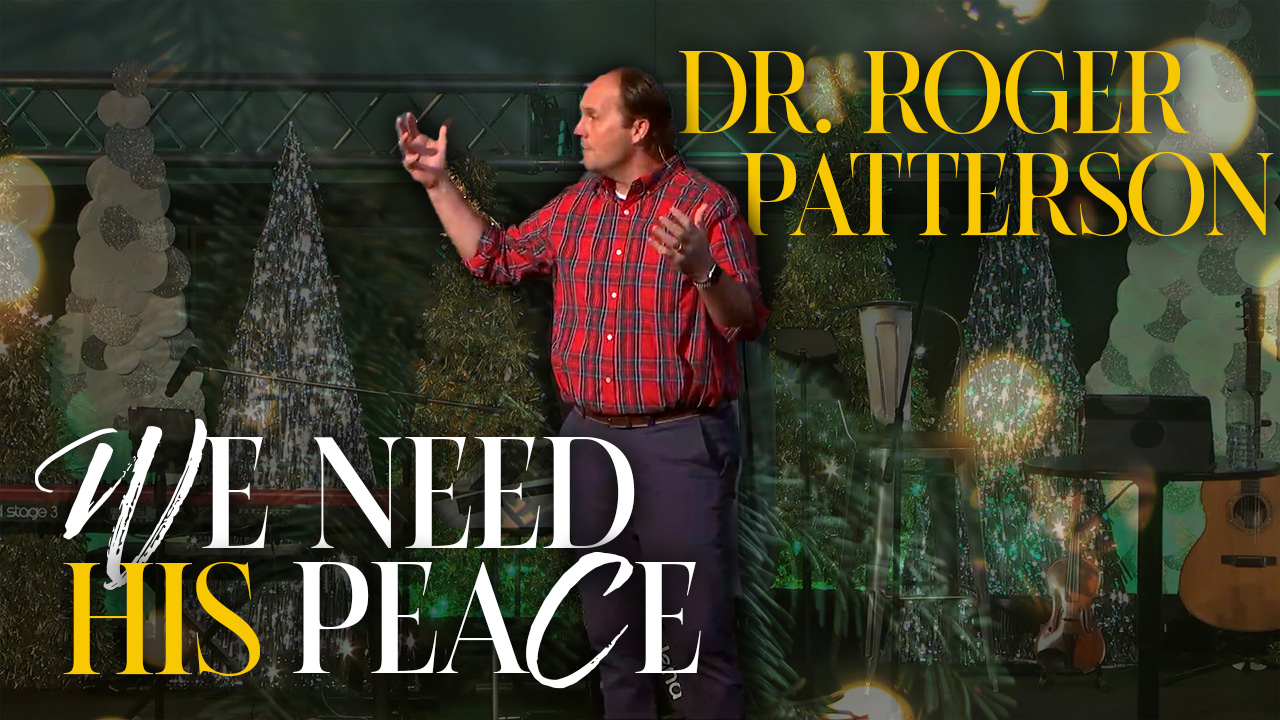 The following is a manuscript of the sermon presented by Senior Pastor Dr. Roger Patterson on Sunday, December 11, 2022 at our Crosspoint Church-Bellaire campus. To view the sermon in full, check out the link below.

Review series- we need Christmas, we need his presence , we need him as king…

Today- we need his peace!

When we think about peace, we often first think about peace as the opposite of war.  Wars have plagued human history and continue to do so today! Though Russia is making most of the lines with its aggression in Ukraine, the Council of Foreign Relations Global Conflict Tracker states currently there are 27 ongoing conflicts worldwide.  There are civil wars and armed conflicts across the globe that will never make the US news.  War is a constant sad reality.  **In the last 3,500 years of recorded history, only about 270 (less than 8%) have been without war.  One might ask in exasperation, will we ever have world peace?  The answer is not without Jesus!  We will see today that the first advent of Jesus was to announce peace, and we are still looking forward to the time in the end when Jesus sits on the throne of David as the Prince of Peace forever.

“And in the same region there were shepherds out in the field, keeping watch over their flock by night. And an angel of the Lord appeared to them, and the glory of the Lord shone around them, and they were filled with great fear. And the angel said to them, “Fear not, for behold, I bring you good news of great joy that will be for all the people. For unto you is born this day in the city of David a Savior, who is Christ the Lord. And this will be a sign for you: you will find a baby wrapped in swaddling cloths and lying in a manger.” And suddenly there was with the angel a multitude of the heavenly host praising God and saying, “Glory to God in the highest, and on earth peace among those with whom he is pleased!” When the angels went away from them into heaven, the shepherds said to one another, “Let us go over to Bethlehem and see this thing that has happened, which the Lord has made known to us.” And they went with haste and found Mary and Joseph, and the baby lying in a manger. And when they saw it, they made known the saying that had been told them concerning this child. And all who heard it wondered at what the shepherds told them. But Mary treasured up all these things, pondering them in her heart. And the shepherds returned, glorifying and praising God for all they had heard and seen, as it had been told them.”

In this passage, The angels announced the good news about Jesus to the shepherds (blue collar night shift workers) and it was primarily a proclamation of peace!  Note:

God is the God of peace! Jesus came to bring us peace. Christmas has always been about peace!  It should be a time of peace and peacemaking.

Have you ever heard about the Christmas Truce of WW1? In 1914… the German soldiers were entrenched against the British soldiers in a bitter battle on the western front lines of the war…

·       at daybreak Christmas morning there was an eerie silence.

·       Finally the silence was broken by a soldier from one side shouting Merry Christmas to the other side.

·       Then others began to shout Christmas greetings, before long some singing of Christmas carols broke out with both sides singing in unison.

·       Then some brave guy was the first to emerge from the trenches to see if the truce was going to hold and before you knew it, the German and the British soldiers were out on the battle field together, unarmed, exchanging hand shakes, trading tobacco, singing songs, conversing freely, wishing each other Merry Christmas.

“Peace I leave with you; my peace I give to you. Not as the world gives do I give to you. Let not your hearts be troubled, neither let them be afraid.”

What did he mean?  How does he give us peace?

For the rest of our time together this morning, I want to give you 3 Ways in Which God Gives us Peace.

Let’s look at this first one.

I. God’s peace toward us.

The first sense in which Jesus brings us peace is that God has graciously granted his peace toward us.

This is not our default position from birth.  Because of sin, we are born in enmity and strife with God.  Apart from Christ, we do NOT have peace with God.

But the baby who was born the first Christmas was named Jesus, because, “…he would save the people from their sins.”

Jesus would grow up to live a sinless life to die on the cross as the substitutionary sacrifice to atone for your sins and mine.  And in the work of the Cross, God granted his peace towards us.

In Christ we have Reconciliation… the enmity between God and man taken away by faith in what Jesus has accomplished. Notice these words from the Apostle Paul.

“Therefore, since we have been justified by faith, we have peace with God through our Lord Jesus Christ. Through him we have also obtained access by faith into this grace in which we stand, and we rejoice in hope of the glory of God.”

“And through him to reconcile to himself all things, whether on earth or in heaven, making peace by the blood of his cross. And you, who once were alienated and hostile in mind, doing evil deeds, he has now reconciled in his body of flesh by his death, in order to present you holy and blameless and above reproach before him.”

Isn’t that good news? Because of the death of Jesus, we have been reconciled to God. We were alienated and hostile, doing evil deeds…but because of his body broken for you and his blood shed for you, you can have peace with God…blameless and above reproach before him.

So when the angel proclaimed peace at the birth announcement, here’s what the angel meant-  Good news world!  God is doing something in and through this child and his life that is going to take God’s wrath away from you and and instead give you peace with God!

Do you have peace with God today?  Have you taken Jesus as your own personal Lord and Savior?  Have you allowed his peace toward you to enter your heart?

Let’s look at this second aspect of peace for our lives.

II. God’s peace within us.

The peace the angel announced is more than God’s peace toward us, it was also a promise that we can experience God’s peace within us.

There is a spiritual reality for the believer that because of our relationships with God and the indwelling Holy Spirit, we can have a sustaining peace in very troubled times.

Have you experienced that? I have!

Paul wrote about it…

“Then you will experience God’s peace, which exceeds anything we can understand. His peace will guard your hearts and minds as you live in Christ Jesus.”

Look at the ability of Jesus to calm the storms of our lives from Mark 4.

“On that day, when evening had come, he said to them, “Let us go across to the other side.” And leaving the crowd, they took him with them in the boat, just as he was. And other boats were with him. And a great windstorm arose, and the waves were breaking into the boat, so that the boat was already filling. But he was in the stern, asleep on the cushion. And they woke him and said to him, “Teacher, do you not care that we are perishing?” And he awoke and rebuked the wind and said to the sea, “Peace! Be still!” And the wind ceased, and there was a great calm. He said to them, “Why are you so afraid? Have you still no faith?” And they were filled with great fear and said to one another, “Who then is this, that even the wind and the sea obey him?”

Do you see Jesus asleep in the midst of the storm that everyone else is in?

Application: Listen…God is at peace, so God has peace to give! God’s peace within himself is the only true and abiding source of peace within man.  God is the source of our peace in the hard days of life.

Listen to Isaiah 26:3. Many of you know that our former pastor, Dr. Barry Landrum died on Friday afternoon. His son-in-law, Mike Van Hoozer noted that this verse was his all time favorite verse.

“You keep him in perfect peace whose mind is stayed on you, because he trusts in you.”

Is your mind on the storm or the one to who can calm it?

Let me share with you this last type of peace available to us all.

Remember that verse from Luke 2…

This third peace is…

III. God’s peace among us.

Peace with God generates peace among men. As we stated in the beginning of the message, our world desperately needs peace!

What is the answer for peace in our relationships and peace among nations?  It’s Jesus!  That’s the Good News that the angel was bringing to the shepherds.

Gospel people called to be peacemakers because we have found peace in the Gospel!

“Blessed are the peacemakers, for they shall be called sons of God.”

This applies to our personal relationships. So let’s evaluate…

“And let the peace of Christ rule in your hearts, to which indeed you were called in one body.”

“For to us a child is born, to us a son is given; and the government shall be upon his shoulder, and his name shall be called Wonderful Counselor, Mighty God, Everlasting Father, Prince of Peace. Of the increase of his government and of peace there will be no end, on the throne of David and over his kingdom, to establish it and to uphold it with justice and with righteousness from this time forth and forevermore. The zeal of the Lord of hosts will do this.”

You may ask, “When will we ever have peace on this earth among men?!”

The Answer: When Jesus finally sits on the throne of David.

The cup and the wafer you will take in your hand represent peace….