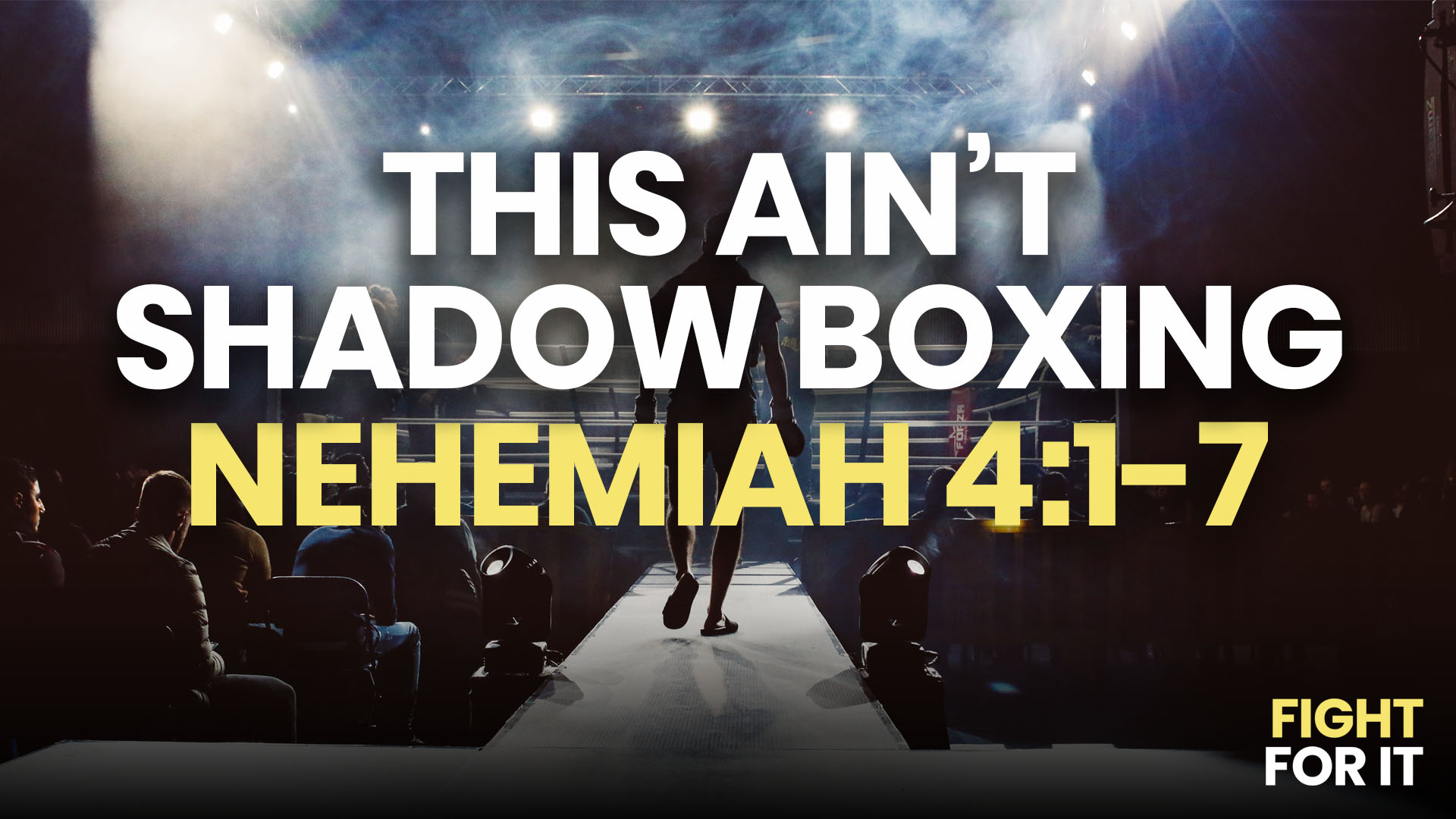 The following is a manuscript of the sermon presented by Media Arts Pastor Justin Kellough on Sunday February 13, 2022 at our Crosspoint Church-Bellaire campus. To view the sermon in full, check out the link below.

We have passed the halfway point on Fight for It.

Stories like the one we just watched are powerful testimonies of how God fights by our side. (Robby’s Story) Make sure to check out fightforitcampaign.com to see more stories and join a Fight For It group- it’s never too late to join or start a group!

The basis of this series is found in Nehemiah 4:14- When I saw their fear, I stood and said to the nobles, the officials, and the rest of the people: “Do not be afraid of them; remember the Lord who is great and awesome, and fight for your brothers, your sons, your daughters, your wives, and your houses.”

Nehemiah’s hometown had fallen apart, and he left his role with the King to restore their wall, and re-establish God’s stronghold and influence in that region.

We believe that every person is or will be in a fight for God’s Kingdom, whether they realize it or not.

The sermon title given to me today is called “This Ain’t Shadow Boxing”– Shadow boxing is taken from the strategy of a boxer fighting an imaginary opponent and watching their shadow against a wall to see their form.

What we want you to understand today is that the stakes in your fight are real- this isn’t practice, and you aren’t fighting an imaginary enemy. Sports are a powerful metaphor for our faith- scripture uses the idea of “racing” a lot! I’m not really a sports guy, so I’m changing this sermon to something with which I can identify.

On January 21, 1999, the modern era was ushered in when the first Super Smash Bros. game was released on Nintendo 64. Finally, there was a game that had all the fighting, but because it was cartoon characters, parents didn’t suspect a thing. Other fighting games at the time were exceptionally graphic, and my brother and I were not allowed to play them. But this game had Pikachu! He’s so cute! I could take out all my aggression against my brother without any physical ramifications. If you played this game, everyone had a favorite character who they felt most confident using. My go to character was Kirby. I would fly up above the fight, turn into a brick and come smashing down on top of my opponents. It was exceptionally fun, but when it came down to it, the stakes were non-existent. My brothers and I would get temporary glee when we won a round, but the victory was ultimately meaningless. The opponents were imaginary, and the damage from the fight was non-existent.

But the fight we’re in today is not Super Smash Bros. The opponents we face are real, and the damage inflicted can be life changing.

In Nehemiah, we get a glimpse of the opposition that he faced in seeking to restore his town.

Visit cityrise.org/notes for a link that will take you directly to a youversion event where you can see today’s scripture, links to worship songs we sang, and the notes from today’s sermon. Or, turn in your physical Bibles to Nehemiah 4.

When Sanballat heard that we were rebuilding the wall, he became furious. He mocked the Jews 2 before his colleagues and the powerful men[b] of Samaria, and said, “What are these pathetic Jews doing? Can they restore it by themselves? Will they offer sacrifices? Will they ever finish it? Can they bring these burnt stones back to life from the mounds of rubble?” 3 Then Tobiah the Ammonite, who was beside him, said, “Indeed, even if a fox climbed up what they are building, he would break down their stone wall!”

4 Listen, our God, for we are despised. Make their insults return on their own heads and let them be taken as plunder to a land of captivity. 5 Do not cover their guilt or let their sin be erased from Your sight, because they have provoked[c] the builders.

6 So we rebuilt the wall until the entire wall was joined together up to half its height, for the people had the will to keep working.

7 [d]When Sanballat, Tobiah, and the Arabs, Ammonites, and Ashdodites heard that the repair to the walls of Jerusalem was progressing and that the gaps were being closed, they became furious.

Who are these bullies?

In this passage, we see Sanballat, Tobiah, the Arabs, the Ammonites, and the Ashdodites.

These people represent factions and groups that completely surrounded Jerusalem. Groups invested in the downfall of the city, and most likely contributed to its state of disrepair. Good news: the king had given his protection and blessing.

The bullies were powerless to actually oppose Nehemiah physically, so the only weapon they had were discouraging words. In almost every way, the opponents Nehemiah faced are identical to the opponents we face when we attempt to do what God has called us to do.

Especially in America- our physical safety is not threatened when we seek to live for God. But the powerful words of peers, family, co-workers, bosses, classmates, and anyone else who might oppose us can deter us and discourage us.

Some of the words they said:

“Feeble Jews”- you are WEAK

“Will they restore the temple themselves?” – you are incompetent

“Can they offer sacrifices?” – what are you going to do, pray the wall up? Your faith can’t accomplish this task.

“Can they revive the stones?” – the building materials are beyond repair- you cannot fix this.

“If a fox were to jump on it, it would break their stone wall down” – your abilities are so limited, all your work will crumble at the slightest pressure.

We might find ourselves in the same boat when trying to do what God wants us to do. Bullies today are rarely so blunt. But the strategies are the same.

Two questions for you today:

(1) What wall are you called to build? (2) Who are the opponents against you?

We cannot take Nehemiah’s experience and apply it to ourselves if our fight is for something of personal ambition. Your wall cannot be to build your business, grow your influence, etc. Nehemiah’s wall to rebuild was all about helping to re-establish God’s glory in this part of the world. This sermon today is almost pointless if the wall you are trying to re-build is not about God.

How can we take our fights and make sure they are about God?

Marriage- fight for your marriage, not so that you or your spouse will be happier, but so that God will be glorified when He restores your relationship.

Work- fight for doing the right thing at work not so that you can get promotions and recognition, but so that others will see your integrity and Christ-like attitude, giving God glory.

Kids- fight for your kids not so that they can be happy and healthy, but so that they will be prepared to make God famous now and when they are out from under your care.

Once we know that we are fighting for something for God, take some time to figure out who is actually opposing you. Sometimes, this is just Satan. More often than not, it’s someone with their own agenda, history, hurts, ambition, and goals. Whatever wall you’re trying to build for God threatens the wall they are trying to build for themselves. Figure out who is against you, and handle it like Nehemiah.

Ultimately, Nehemiah didn’t do anything to these guys hurling insults in this passage. Too often, we are tempted to abandon the wall we are trying to build for God in order to fight our opponents. This is absolutely not what God wants you to do.

Nehemiah had the protection of the king and so do you. You do not need to fight your opponents because you have the protection of the King. When you are tempted to battle your opponents instead of holding firm to building the wall God has asked you to build, you are sinning. It FEELS like the right thing to do- get the bad guys out of the way so you can do your job. But really, unless God specifically calls you to face the opponents in His name, it reveals a lack of trust that God will take care of the bad guys for you.

The apostle Peter outlined several strategies for us to use instead of fighting against our opponents.

Don’t Be Surprised “Beloved, do not be surprised at the fiery trial when it comes upon you to test you, as though something strange were happening to you.” (1 Pet. 4:12)

Repent When Needed “But let none of you suffer as a murderer or a thief or an evildoer or as a meddler.” (1 Pet. 4:15)

Love Your Enemies “Do not repay evil for evil or reviling for reviling, but on the contrary, bless, for to this you were called.” (1 Pet. 3:9)

Trust God and Do Good “Therefore, let those who suffer according to God’s will entrust their souls to a faithful Creator while doing good.” (1 Pet. 4:19)

Share Your Hope “But in your hearts honor Christ the Lord as holy, always being prepared to make a defense to anyone who asks you for a reason for the hope that is in you.” (1 Pet. 3:15)

Remember Your Christian Family “Resist him, firm in your faith, knowing that the same kinds of suffering are being experienced by your brotherhood throughout the world.” (1 Pet. 5:9)

Look to the King “And after you have suffered a little while, the God of all grace, who has called you to his eternal glory in Christ, will himself restore, confirm, strengthen, and establish you.” (1 Pet. 5:10)

Crown Him as your king. We are going to close with this old hymn. A crown is a symbol of the authority the King has. To crown Jesus is to acknowledge his Kingship in your life. We do this when we become Christians. But beyond our first recognition, we must crown him, or recognize his authority in our lives. When facing opponents, we have to trust the King and his protection.

If you’re failing to trust our King today, sing this song as a confession and as a proclamation. Crown Him with many crowns- for so many reasons, Jesus is worthy of being the Lord and Ruler of our lives. Crown Him the Lord of life- he defeated death! Acknowledge this supernatural power today for him and the power it means for our resurrection. Crown Him the Lord of Love- broken, bleeding, and abused on a cross, he did this for love. He did this for you.

If you’re facing opponents today as you seek to do something God has called you to do, and you are tempted to fight them instead of trusting God to fight them, use this time of worship to crown Christ your King again.