West U Baptist Your Kingdom Come

Go to Your Kingdom Come ministy at a specific location.
or view all locations . 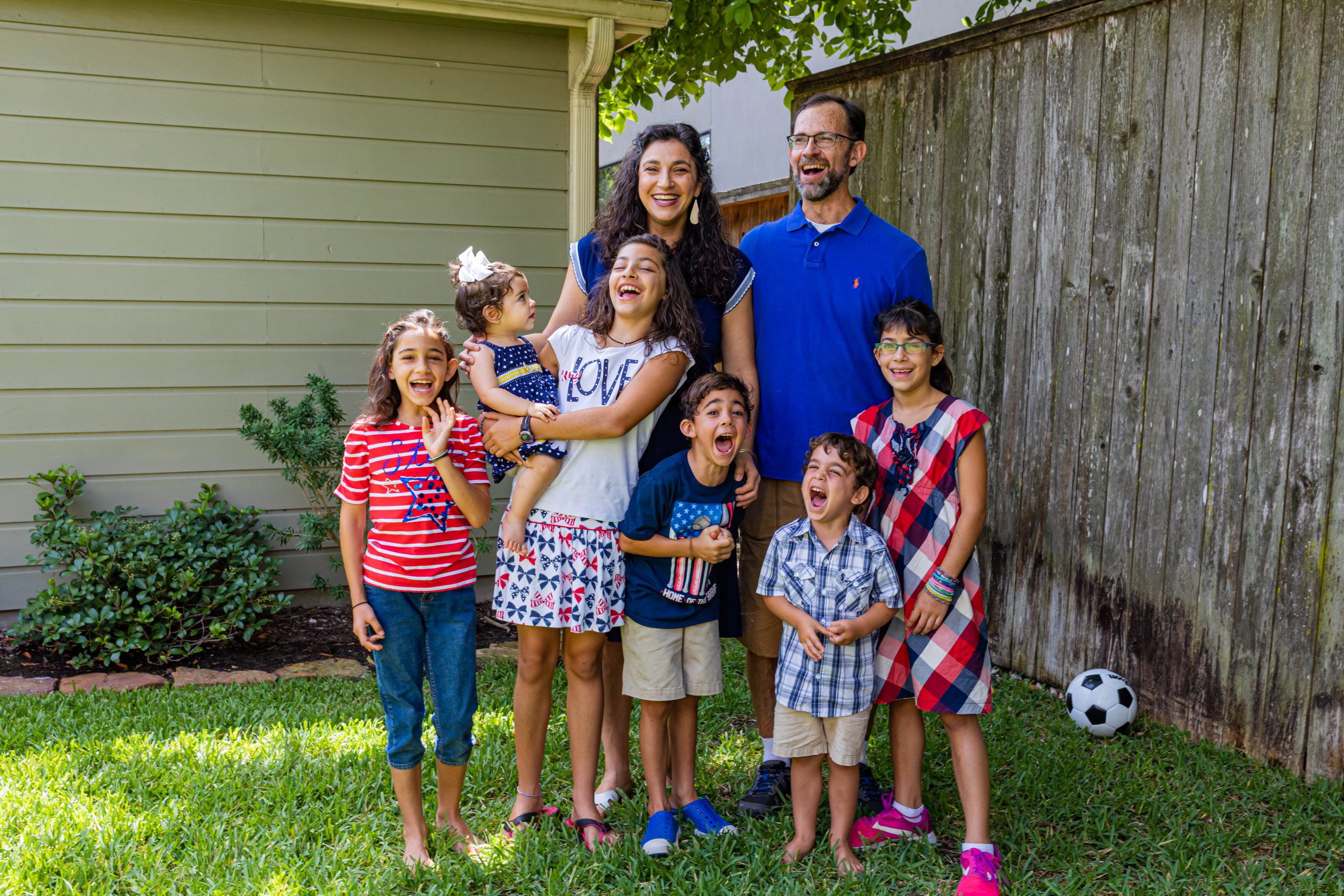 “We have one gear, and that gear is ‘let Your Kingdom come, let Your will be done on earth as it is in heaven.’”

For Keith and Tricia’s six children, their faith experience could not be more different from that of their parents. Today, this husband and wife team guide their family with an unwavering commitment to lead people to Jesus, which they live out in their daily lives.

Tricia explains, “We have one gear, and that gear is ‘let Your Kingdom come, let Your will be done on earth as it is in heaven.’ So when I’m at the grocery store and God gives me a word of knowledge for someone, I’m sharing it with them. Or when we’re out and about in the community and my daughter sees someone who needs physical healing, we go pray for them.”

“I’m desperate for [our children] to know that God loves them… and that the Kingdom of God, the unseen realm, is real, and God’s love is powerful, and it makes a huge difference in our own lives and in the lives of the people around us.”

Before coming to know Christ in college, the only teaching from the Bible Tricia knew was the Lord’s Prayer. With Armenian parents, she would consider her family growing up to be culturally Christian, but not much more than that.

Keith shares a similar vague childhood experience with the teachings of Jesus as he grew up on a farm in Missouri.

“My mother started taking me to church when I was five because she thought that was something good for children. She didn’t believe then, and I didn’t believe until I got to college and I was invited to be part of one of the Christian organizations on campus.”

Their journey from childhoods with minimal faith experiences to becoming parents devoted to the Great Commission finds its beginnings in a clear call on both of their lives to share the gospel with the Sudanese people in Africa. Today, Keith and Tricia are raising their family in Chad with a focus on sharing Jesus with people from neighboring Sudan who are fleeing the war-torn country. For Tricia, this calling came to her at a Christian conference when she was in college.

With this calling burning in her heart, Tricia had a few stops along her path from college to Africa, including several years at our West U Baptist campus, where she worshipped and served while she was in physical therapy school and then into her career. While at West U Baptist, Tricia coached Upward basketball, taught 4th grade Sunday School, and assisted with the college and career class. Additionally, she was part of the original team that launched our Crosspoint Church – Bellaire campus in 2005, committing to establish a new local body of believers in that community. During her years in Houston, the people she served and worshiped with at our church became the support system that, to this day, still walk with her and Keith on their journey to sharing Jesus with the people of Sudan.

During Tricia’s years of higher education and early in her career, Keith was taking his own journey on the path to Sudan, although the country came into focus much later for him. The summer before attending graduate school at Stanford, Keith went on a short-term mission trip that opened his eyes to who he was, and what he wanted to do with his life.

“As many problems as there are in any church that you’re connected to, there would be a lot more problems if there was no church at all. I just saw that my life was to be about establishing the church where it wasn’t at all, and that’s an important part of what we as Christians everywhere are to be about,” Keith says.

Through a series of interactions and connections with an international mission organization, God eventually clarified Keith’s call to Sudan, and he landed there in August of 2006, six months after Tricia. Serving on the same team, Keith and Tricia were diligent to keep their friendship professional, partnering together to learn the local language during their first year in Sudan. However, as they served alongside each other, God eventually prompted Keith to move beyond friendship and seek a stronger emotional connection. By October of 2007, they were engaged, returning to the US to get married shortly after, and then they spent over a year focusing on their relationship before returning to Africa together in 2010. 14 years after first landing in Africa, Keith and Tricia have served the Sudanese people together in Sudan, Egypt, and Chad, welcoming their six children along the way and leaning on each other to fulfill the calling God has placed on their lives.

Keith shares, “We met in Sudan and got to know each other, so it’s always been obvious that God called both of us to this ministry . . . I never had that feeling like I’m in this by myself.” Keith remembers one time in particular that his partnership with Tricia in the gospel carried him through a difficult moment.

“I had made this big ministry mistake that had kind of incriminated this guy who was already in jail, and it was really looking like he was going to get put away for a long time because of my mistake. I was feeling really ashamed of that, and so Tricia being there, to just speak belief in me, and speak truth and God’s love, I really needed for her to be speaking the bigness of God over the situation . . . I was ready to give up but having a wife who was right there in it with me who was able to speak directly into my life helped,” Keith says.

It would be easy to assume that Keith and Tricia do the majority of Kingdom work that their family has been called to do, but each of the six children has been involved in reaching community members for Christ since day one. And as each year goes by, the spiritual giftings in each of the kids become more and more evident as they work as a family to share the hope that Jesus brings. One of Tricia’s favorite memories in ministry with her family involves a woman who had started a house church in her home, and how God worked through Lillian, her oldest child.

“I went to her home, and she gathered twenty women and older children, not counting babies, and my big girls went with me . . . We shared the gospel, showed them Mary Magdalene [a short film that illustrates the gospel message], and then shared the gospel again. And I asked if anyone wanted to respond, and a twelve-year-old stood up and said, ‘I have had this heart problem since I was a baby,’ and Lillian and I prayed for him and he was healed. And then everyone kept standing up—‘I’ve got this problem! I need this healing! I want to follow Jesus! I want to enter the Kingdom!’—and we’re just praying and laying hands on people. The Holy Spirit was all over it!” Tricia says.

Reading stories like this might lead an American Christian to believe there is something special happening on the mission field that isn’t possible in their immediate context. It’s tempting to assume that through special abilities and callings, missionaries are more likely to see God work in these amazing ways. However, the life of a family on the mission field is often strikingly similar to that of families elsewhere. Tricia explains:

“I try to wake up before my kids and have some prayer and worship time and some exercise time. But not much; I’ve mainly had to learn how to connect with God and stay connected with Him in my daily life because the days of having a 30-minute, 60-minute quiet time are over for now,” Tricia says.

The family has breakfast together, and then the morning is spent working through homeschool curriculum and activities for the children. The family’s house helper plays a key role in assisting in a variety of ways, and Tricia has found this friend to be the person God has given her the most opportunity to disciple after leading her to Christ early in their relationship.

“Often I’m having a touch-base conversation with her in the morning. I’ll let her listen to scriptures in Chadian Arabic, so sometimes I’ll be setting that up for her. A lot of our informal discipleship happens in the morning before lunch.”

“At certain seasons in life, once a week I will go out prayer walking with another ex-pat I’m discipling or mentoring, or I take one of my kids with me, or all of my kids. And we just walk for an hour, pray, worship, and almost 80% of the time we end up sharing the gospel . . . Before you go out you ask God, ‘Okay, who are we looking for?’ or ‘what are we looking for?’ and He’ll show us ‘oh, a red door,’ or ‘a woman with this kind of wrap (a tobe),’ and we go look for those people, and we often find them,” Tricia says.

The missionary strategy that Keith, Tricia, and the children employ really isn’t much of a strategy. They truly are making disciples as they go, seeking to maximize opportunities God presents, while working to be in tune with the leading of the Holy Spirit. Keith summarizes how this philosophy plays out:

“Somebody told us a long time ago to try to mention Jesus in the first five minutes of a relationship . . . It’s about bringing up Jesus and talking to people about the things they are learning, and praying for people. Being known as a spiritual person is a big thing; that way, when people have a problem, or God’s doing something in their life, and when they want to find somebody to talk about that with, well, you’re one of the people they think of. So you go around praying for people and telling them what you’re learning about God, what you’re experiencing, praying for sick people—you know, those types of things make us known as a spiritual person.”

“Our house helper’s husband still hasn’t believed, but one time he was reading the Bible because ‘the foreigner Keith prayed for me one time and I was healed, and so I believe there’s something true about the Bible and I want to learn about it,’” Keith says.

At CityRise, we are unwavering in our commitment to lead people to Jesus, and this family that is part of our church community exemplifies it in ways that most probably haven’t seen before. It’s easy to conflate this commitment with a complete upheaval of one’s life for the gospel. However, Keith, Tricia, and their children reveal just how natural and informal this calling can be. Whether living in Chad or Houston, the concept and the calling are identical—it’s about tuning into the Spirit’s leading through prayer (fit in between the myriad of demands of work and family) and positioning yourself as a spiritual person.

Tricia reiterates how this universal calling for believers to share the love of Christ plays out in their life; “It doesn’t matter if we’re in Chad or America, if it’s in Arabic or English. We have one gear, and that’s, ‘Your Kingdom come, Your will be done, on earth as it is in heaven’ in our lives, and in the lives of the people around us.”